The factory used highly qualified sub suppliers and the cars construction was simple. The production numbers were low, the A2-model, for example, only approx. 5000 cars. No re-sale was allowed, the cabs as they finally were worn out, were brought back to factory and scrapped. The only exception were those nearly 500 cars, that were exported from the factory scrap yard to Finland in 1951. Models for civil use were also made later. Finns know best the taxi model from the film 'Taxi driver'. The yellow New York cab of renewed A8 body model (A8 model was originally introduces in 1956). Checker kept this model until the end of car production in 1982. The company continued production making car panels as a sub-contracter until closing down in 2009.

Lord Mayor of Helsinki, Erik von Frenckel and minister Onni Hiltunen recognized, that after the sufferings of World War II, the taxi car fleet was in a very bad state, and this on the eve of the Olympic Games! Foreign currency being very restricted, they could get only limited funds for buying second hand cars abroad. Autoilijoiden Hankinta Oy, company established by professional drivers, sent a delegation to the USA to Checker Taxi Company's depot field to choose vehicles for Finland. It was the aim to buy newer A4 models but because of the small currency licence it was decided to be satisfied with the older A2 models. Here is an extract from an old memo license from 1950s:

The managing director of 'Autoilijoiden Hankinta Oy', who at same time was the president of AAL (Association of professional car drivers) and his closest co-worker, were authorized to purchase the cars from Checker Taxi Company or from anyone else as they found fit. For some totally inexplicable reason, instead of looking for newer cars of better quality they purchased cars of model 1946-1948 (only two were 1948 models) which were no longer in use. They made agreements to have the cars repaired and shipped to Finland. Having little knowledge of shipping and other commercial matters, they among others, let the cars be loaded and re-loaded two unnecessary times. That caused a large amount of the cars to arrive in a very bad shape, in addition to the damages by the sea. As only a few of the cars that arrived were purchased with money from the taxi drivers, the drivers assembled in Helsinki to discuss how to correct the unhappy deal.

The bad shape of the cars was a big disappointment for the buyers. The newspapers took it up widely and the matter was discussed even in the parliament. This caused the reputation of the cars to suffer from the start. Actually, the Checkers with their sufficient space and technology, suited Finnish conditions well, but there were difficulties with parts and service - the situation made worse by the authorities, who gave no import licences for the spare parts. The well known Finnish 'self-made' car dealer, inventor and aviator SPJ Keinänen did his best to negotiate for the spare parts or even new cars from Checker Taxi Company, but with little result. Innocent of the bad deal he was made guilty of the misfortune. However, after the Olympic games the imported cars were driven to their end as taxis all over Finland and are now a part of automobile history of Finland. 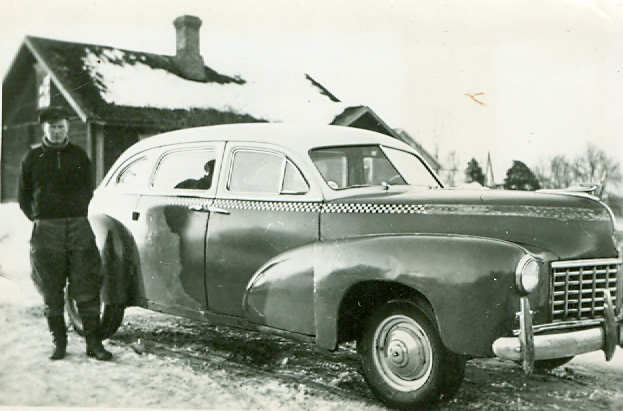